The author of “Savages” and other best-sellers set in and around his former Dana Point home, Don Winslow began investigating the Mexican drug cartels and the war on drugs in 1998. The subject consumed him for decades, fueling his 2005 novel “The Power of the Dog” and its 2015 followup “The Cartel,” lauded by James Ellroy as “The ‘War and Peace’ of dope war books.” The new novel, “The Border,” brings readers into today’s opioid crisis.

WHAT SPARKED THE TRILOGY
Like a lot of Southern Californians, I’d go down to Mexico on weekends. I was involved in helping to build a school in Tijuana, for instance. And then to wake up one morning and read about (the 1998 Ensenada massacre) … What really stuck with me was the image of 19 innocent people being put up against a wall in a courtyard and being machine-gunned to death. Children and adults. Writing about it was the furthest thing from my mind. I was really just researching for myself to try to come to grips with how such a thing could
be possible. 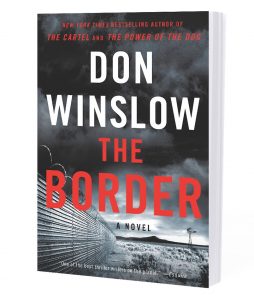 THE EVOLUTION OF THE STORY
When I finished “The Power of the Dog,” I swore I would not write another one. My agent would call to talk about a second book, and I would literally hang up on him. Literally. Click. Then after “The Cartel,” I went through the same process. I was exhausted. And kind of sad, I think. I did not want to revisit that world. It had been my profound hope that there would be no story left to tell. Again, that was wrong. Mexico has just experienced its two most violent years since it started keeping track. The United States, we’ve had more drug overdose deaths than we’ve ever had in our history.

CREATING CHARACTERS
My job is to bring people into a world they otherwise couldn’t enter. In order to do that, I try to see the world through those characters’ eyes. Some of those characters are completely fictional. Others are inspired from real life.

THE WAR ON DRUGS
When I began, I wasn’t thinking about these issues at all. Now, 21 years down the line, I have some really strong ideas about it. After 50 years of the war on drugs, things have gotten worse, not better. It’s time for us to try something different. … We will never solve the drug problem via confiscation or interdiction. We will never solve it on the market side. We can only solve it on the consumer side. As long as there are consumers, there will be a market. So what I’m asking people to think about when we talk about corruption is, what’s the corruption of the American soul that makes us the largest users of illegal drugs in the world?