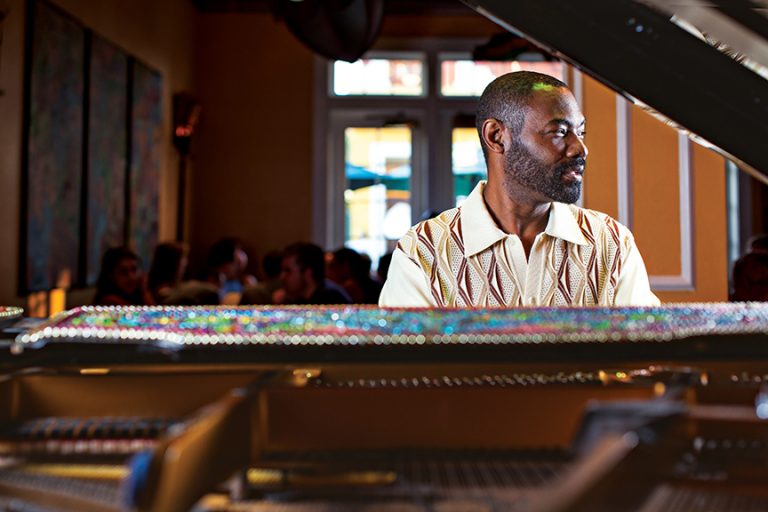 When he performs at Ralph Brennan’s Jazz Kitchen in Downtown Disney, Wilson says he feels like an ambassador for American music. The Newport Beach musician, originally from Louisiana, meets visitors from places such as Iceland and Brazil, and treats them to what often is their first live jazz concert. They could hardly be in better hands. Wilson, whose solo album, “My Love,” drops this month, has played piano and guitar with such greats as Stevie Wonder and Norman Connors.

I play and sing 50 songs a night. Some of my favorites are “Sentimental Reasons,” and “Unforgettable.” I take requests as well.

I can usually handle anything. One time a group came in that didn’t identify with anything I was doing. They wanted to hear some country. So I played them Hank Williams, and after that they were fans. Sometimes I’ll even play “Chopsticks”—that gets the kids’ attention!

How was working with Stevie?

The first time I met him, we did a radio show honoring Michael Jackson. It was just the two of us, and during commercials we jammed. I played one of his songs and he complimented me with, “Wow, you didn’t learn that from the songbook!” And he’s not easy to impress.

Did you grow up with jazz?

In my house it was either gospel or standards, and everyone in my family was a musician or a singer. My parents told me I was playing a broom at the age of 3 and it quickly was replaced with a guitar.

Catch Wilson on Tuesday and Wednesday at the Jazz Kitchen in Anaheim.