She has tackled lust, wrath, sloth, and envy since the first book in the series appeared in 2017. Now in “A Pinch of Gluttony,” Boris focuses on Honey Wells, the stressed-out chef and owner of a Laguna Niguel cooking store who finds a dead body while hiking with her firefighter husband in Black Star Canyon. As her anxiety worsens, she encounters a reclusive “prepper” hoarding food and supplies at his nearby compound, and befriends the pretty young woman who lives there.

THE ROAD TO WRITING

I started in magazines, and I did a lot of marketing and advertising. Then when I became a mom, I went back to school and got a degree in physical fitness because it seemed a good mom career. I was a personal trainer, a weight management coach. My clients said, “You should write a (fitness) book.” So I wrote my first book, which is called “The Wine and Chocolate Workout.” That got me back into writing, and I moved back into magazine writing. I interviewed two authors for an online magazine, they were both fiction writers, and I was like, you can do that? I thought I would try. That’s how that happened.

INSPIRED BY A HITCHCOCK MOVIE

Generally speaking, psychological suspense stories have an everyman kind of protagonist. You have a person who is not a cop or an FBI agent or a superhero or anything like that. It’s Joe Blow runs into danger. I wanted a series; that meant that I had to have a different protagonist for every book. I thought as long as I
was changing protagonists, maybe it would be fun to change tropes a little bit. So each book is inspired by a different movie or novel. The plot isn’t the same, but the feel is the same. For me, “A Pinch of Gluttony” was inspired by “Strangers on a Train.” 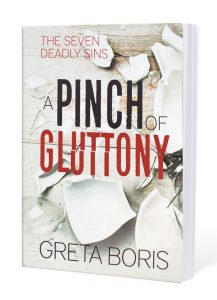 A THEORY OF SIN

I think the biggest theme is that we all have our own what I call B.S. That’s our besetting sin. This is my theory: Each one of us is more inclined to struggle with one of the seven deadly sins than we are with the others, and it depends on your personality type and your background and your upbringing. But we all struggle. Each of them, if we give into it, it’s ultimately harmful. No, it might not bring us into the arms of a murderer, but it is going to hurt you. … Whichever book I’m writing and I’m researching the sin, I feel like, I’m the worst person in the world; this is me. When I was writing envy, several authors who are friends of mine had great things happen to them. I was like, OK, this is rough.

I do feel like southern Orange County is a character in the series. All the locations in my books are real except for specific houses or businesses where crimes are committed because I didn’t think that was very nice. All the (historical) stuff about Black Star Canyon is accurate. There have been a lot of crimes there. It is considered by some to be the most haunted biking trail in California because of the Native American massacre that happened there.