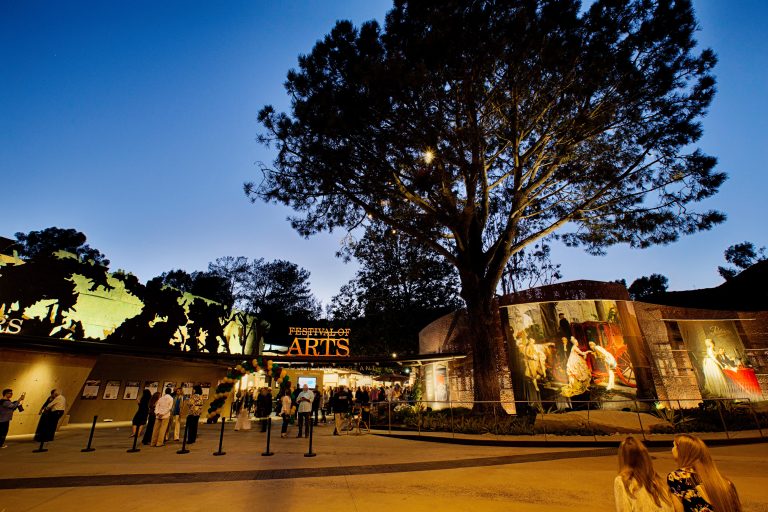 Laguna Beach’s Festival of Arts opens Wednesday, July 5, for the 2017 season, and it’s not just new artwork that’ll be on display. A $10.5 million renovation of the festival grounds will be one of the stars this summer, too.

Walkways have been widened and seating has been added. There’s a new layout for the artists’ exhibit area and for the concert stage and lawn area (which is laid with sustainable artificial turf). The gift shop has been relocated and expanded, and a visitor’s information area was added right at the entrance. The exhibit area for artwork created by Orange County students in grades K-12 has a more prominent location at the front. Tensile roof pavilions replace the former concrete and canvas overhead canopies, providing shade and protection for visitors and the artists.

The wine-tasting area has been expanded, and there are three new workshop venues for classes and demonstrations of printmaking, ceramics, and mixed-media art. And festival staff heard the complaints of female patrons: The capacity of the women’s bathroom has been nearly doubled (there are 31 stalls, instead of 17).

The Festival of Arts began in 1932 and is Laguna Beach’s oldest fine arts show. The grounds were last updated in 1964. Newport Beach’s Bauer Architects came up with the new designs, which were inspired by the natural beauty of the Laguna Canyon site and incorporate sustainable materials and swooping curves throughout. The firm also designed the Festival’s 2-year-old façade.

The renovation was originally scheduled for late 2015 into 2016, but it was postponed a year because an El Niño condition was forecast for that winter. We all know how that turned out. Instead, demolition began Oct. 1, 2016 … and then it started raining. And pouring. Fifteen rain days had been built into the construction schedule, and they ended up using 19 rain days. Not a bad guess.