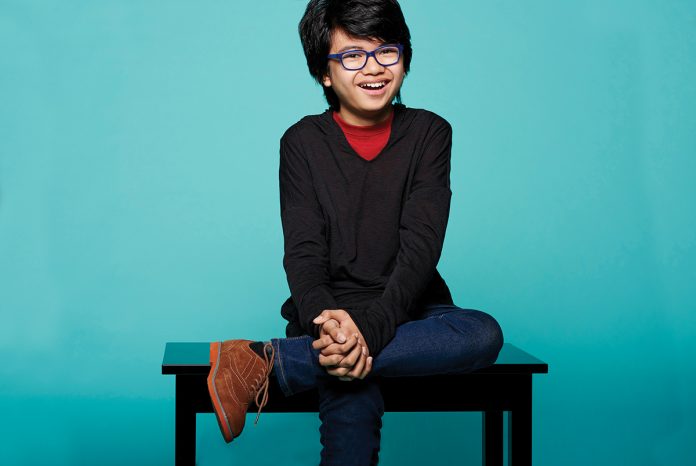 Joey Alexander is an accomplished jazz pianist, composer, arranger, and bandleader from the Indonesian island of Bali. He’s taken his Joey Alexander Trio around the world, jamming from Tel Aviv to Montreal, Prague to Abu Dhabi. He’s been nominated for a Grammy Award and praised by the likes of Wynton Marsalis and Herbie Hancock.

At 6, inspired by father’s extensive album collection, Alexander taught himself to play jazz on an electronic keyboard. He was able to pick out Thelonious Monk tunes by ear. More formal training followed and Alexander’s progress was so rapid, he was hailed a prodigy. Few prodigies, though, have his capacity to express feeling through improvisation.

Alexander will come to the Irvine Barclay Theatre in September, right after the release of his second album, “Countdown.” The young teenager spoke with me from his home in New York City, where I could hear him fiddling with a few piano keys as he dutifully answered my questions.

Orange Coast: Your debut album is called “My Favorite Things.” What are some of your favorite things in life?

Alexander: I’ve got a lot of favorite things: the music I’m playing, my parents, the musicians I’m playing with, my friends. All are an inspiration to me.

Orange Coast: You’re mostly self-taught. Do you remember what that process of discovery was like?

Alexander: I don’t really remember exactly. I remember my dad got me a piano when I was 7.

Orange Coast: And you watched YouTube videos to learn?

Orange Coast: Can you describe what it’s like to play a song by ear? How something goes in your ears and comes out your fingertips?

Alexander: I can’t really demonstrate it. (I) just feel it, you know?

Orange Coast: What’s the best thing about jazz music for you?

Alexander: The thing I love about jazz is the feeling of swing and improvisation. Jazz is all about self-expression. It’s really personal.

Alexander: I’ve had great opportunities. I’m really thankful for that. The opportunity with Mr. Wynton Marsalis, Herbie Hancock … it’s really a blessing for me to meet them and have a chance to play with them.

Alexander: It was really a great honor for me to be there, meeting him and playing for him. It’s been a dream of mine to meet him.

Orange Coast: We have fantastic beaches in Orange County and Disneyland is just up the road from the Irvine Barclay in Anaheim. Will you have any time for sightseeing while you’re here?

Alexander: I hope so!

Orange Coast: If you had to choose, beach or Disneyland?

Alexander: I will decide when I get there.

Orange Coast: Do you make a lot of decisions that way–spontaneously?

Alexander: Yes! Just like when I do my music.