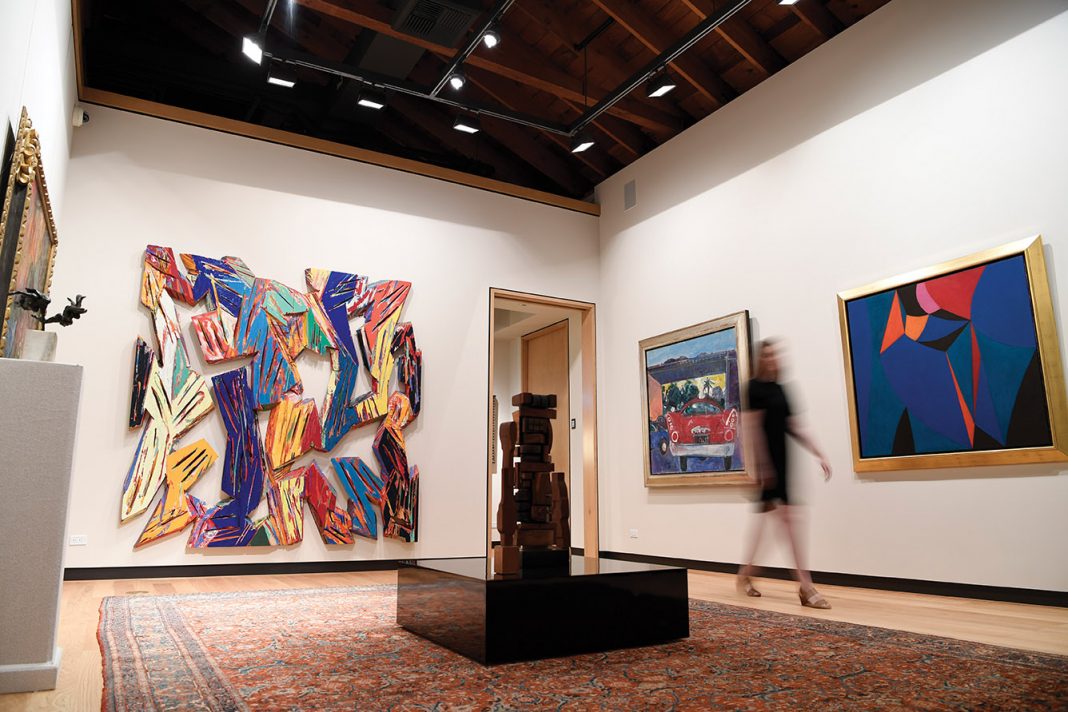 The dean of the Claire Trevor School of the Arts at UC Irvine is waving his hands and gesticulating, and his voice rises and falls passionately as he talks about the future. Dressed in austere black, he leans forward to make a point, eye contact a constant from behind his round John Lennon eyeglasses.

As the conversation meanders from community involvement to his long career in the humanities to his passion for dance, literature, and interdisciplinary studies, there’s little ego, but rather a scholar’s deep love for knowledge and creativity.

Barker is the executive director of UC Irvine’s newly formed Institute and Museum for California Art, or IMCA, a $100 million research facility that aims to bring together every department in the school. He’s also overseeing the Buck Collection, 3,500 pieces of 20th-century California art gifted to the school in 2017, that’s been valued from
$30 million to $40 million.

“You’re going to see stuff you didn’t even know existed,” he says.

Now you know why he’s excited.

When Newport Beach real estate developer Gerald E. Buck died in 2013, he left behind an art collection that few knew existed. Two- and three-dimensional art in every genre—from canvases and sculptures to works on paper and digital, as well as 400 boxes of art books—was purchased and then put away. If you wanted to view any of it, you had to see something loaned to a museum or be invited to Buck’s private gallery in Laguna Beach. Just off Coast Highway, the nondescript building with no signage or visible parking maintains the same low-key profile as its former owner, the U.S. Postal Service.

Late last year, UC Irvine invited local critics and editors to tour the space, and it was the kind of thing art lovers dream of. Barker, a longtime lecturer on art theory, history, and aesthetics, led the group from room to room to view and discuss previously unseen work by artists as diverse as Helen Lundeberg, Sam Francis, Richard Diebenkorn, Wayne Thiebaud, and Carlos Almaraz.

The group meandered around the beautiful gallery, absent docents asking us to step behind a line, the work accessible just inches away, hanging on every wall, even in the bathroom. The tour culminated in a visit to the on-site storage room, so densely packed with paintings hanging from rolling metal racks that it was a treasure by itself. Think of the warehousing vault you see at The Broad in Los Angeles, just smaller.

It’s uncertain whether UC Irvine will continue to lease the space in Laguna Beach, and if it does, whether that space will ever be open to the public. But that doesn’t mean the voluminous collection will stay hidden away. Some of the best pieces will be on display beginning this month.

Barker’s aim is to show California as the “Paris of the 21st century” with the reveal of IMCA, a three-step process.

Step one will be the first public showing of 50 to 55 works from the Buck Collection at UC Irvine’s two campus art venues, the Contemporary Arts Center and the University Art Gallery on Sept. 29.

When asked how he will distill the first-look exhibition down from such an embarrassment of riches, he says it’s already done. Barker’s co-curators Kevin Appel, department chairman of art, and chairwoman of art history Cécile Whiting are fully aware that the impression must be a good one.

Choosing the most aesthetically pleasing, the trio made sure that the pieces are “exemplary of their genres,” aiming for a breadth of representation with a special focus on art in the collection created by former UC Irvine faculty and alumni. Respectfully timed so they won’t interfere with student shows, the exhibits will be free to the public. Symposia, artists, and speakers will be scheduled until Jan. 5.

Step two will take place in fall 2019, as work is moved to the UCI Research Park on Innovation Drive in Irvine. A 16,000-square-foot space in the facility will show more work from the Buck Collection, alongside items from Joan Irvine Smith’s recently donated 1,500-piece impressionist and plein-air collection at the Irvine Museum. The space will be the temporary showplace for both collections, with work swapped in and out over the next few years.

The final phase is the 100,000-square-foot IMCA building, with an aggressive fundraising effort planned. Once financial goals have been reached, construction will begin.

After speaking with every dean, Barker says all 13 schools at UC Irvine will have a stake in the new institute and museum. “UCI is blessed with a group of very forward-looking deans and faculty who understand the remarkable advantages of the Institute’s interdisciplinary possibilities,” he says. “We’ve already had exciting suggestions for research activities and art exhibitions from around the campus.”

Referencing the Getty as inspiration, he talks about the potential for new literature, theater productions, and dance directly inspired by the art; scholars studying the legal implications of copyright, intellectual property, discussing stolen artwork, or pondering free speech and censorship issues; creating a place where research into the perceptions of beauty and aesthetics is taken seriously. Imagine medical departments researching whether an individual’s health can be diagnosed from their portraits. Picture an art-conservation center where neglected, damaged work is given new life, where the latest techniques in preservation are studied and improved upon. Even the Department of Chemistry’s nuclear-reactor facility at the university has expressed interest in its lab researching the nuclear and atomic elements of the art materials.

The possibilities are limited only by imagination and the depth of donors’ pockets.

Smiling happily, Barker leans back and predicts: “We’ll change the way we look at art in Orange County.”

Sept. 29 to Jan. 5: Public showing of works from the Buck Collection at UC Irvine’s two campus art venues, plus symposia, artists, and speakers

Fall 2019: Work moved to a 16,000-square-foot facility at UCI Research Park, where art from the Buck and Joan Irvine Smith collections will be displayed temporarily

Stay up to date at imca.uci.edu.