Where is Main Street Orange County? Not at Disneyland. The uninformed might scoff at the idea of our county, a widespread collection of diverse cities, having an archetypal thoroughfare. But we know better. O.C. doesn’t have one Main Street—we are spoiled with several, each acting as the vibrant hub of its respective town, packed with history yet ever-evolving.

Founded in 1887, Fullerton is one of the oldest cities in Orange County, and it has the walkable downtown to prove it. But it’s not showing its age; the historic core is more vibrant than it has been in decades.

When the city started its revitalization project in the 1990s, one of the first priorities was the restoration of the majestic Beaux Arts buildings constructed on and around Harbor Boulevard in the 1920s and ’30s. Now, eight of those buildings are on the National Register of Historic Places.

Still, it’s easy to forget the city’s pedigree while walking along the wide sidewalks shaded by tall, leafy trees, because the shops in the street-level storefronts of the historic buildings are so alluring. There’s Found Shop, owned by stylist Jeni Maus, filled with crisp linen shirts, rustic throw pillows, canvas tote bags, and letterpress cards, all artfully displayed on vintage furniture. Then there’s Share and Do Good, where every item sold results in a donation to charity. Pretty aquamarine earrings, for instance, help support livable wages for women in India.

The restaurants and cafes are likewise worth a stop. At the French-inspired Rialto Cafe, the kitchen turns out addictive crepes and omelets for breakfast and lunch. Across the street, Green Bliss creates swoon-worthy vegan fare, including an avocado BLT with homemade coconut “bacon.” And Night Owl, the kind of coffeehouse every college town needs, is the perfect place to pick up a latte before heading to a movie screening or pop-up artisan market at the Fox Theatre, Fullerton’s latest restoration project. 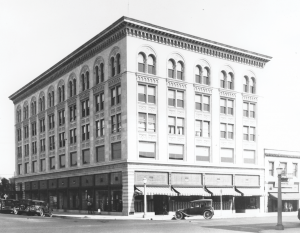 Named for Charles C. Chapman, Fullerton’s first mayor, this five-story Beaux Arts beauty was the tallest building in Orange County when it opened at the corner of Wilshire Avenue and Harbor Boulevard. 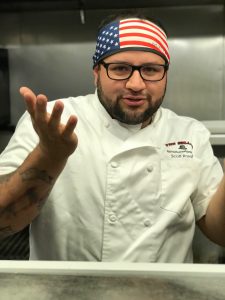 Favorite thing to cook at The Cellar
The Chef’s Cut. We change it daily, and it could be anything. Though we have a French-inspired menu, we can expand the boundaries a bit on that one, and it’s a fun challenge.

My wife and I like going to Kopan Ramen. I usually get the katsu spicy ramen bowl. We also like Slice Shabu for chicken and beef hot pot.

Best thing about being in Downtown Fullerton

It’s unpredictable. You could have a fully booked restaurant on a Wednesday, and the total opposite on a Thursday.

Best place to get a drink in Fullerton

I like going to shows at The Slidebar. A buddy and I will go get
a beer and watch a couple of bands play. And the cocktails are
good at Tribune.

His goal as chef at The Cellar

I want guests to come in and say, “This tastes like home.” If our food makes someone feel warm and good and lets them relive a memory, that’s great.