In “Big Shot,” you star alongside John Stamos who plays a basketball coach at an all-girls private high school. Did you two bond over your O.C. roots?
Oh yeah! He mentioned that when we first met that he’s from Cypress. We kind of had the same journey going into this industry. He was working at his dad’s restaurant and didn’t want to go college. We just bonded over the fact that we didn’t really know what we wanted to do other than acting.

You play Carolyn, one of the girls on the team. What attracted you to this role?
Mainly the fact that she’s so driven about basketball and the things she’s passionate about. She will work so hard to get whatever she wants and she’s also very protective of her friends and I think we relate to each other in that way. I got the audition request from my manager in August 2019. There was something so special about the script when I first read it. From the beginning, I really wanted to be a part of it. “Big Shot” is a family show. It talks alot about redemption and second chances and all of these characters really just come into their own throughout the whole season. It touches on incredible topics that aren’t highlighted as much in the media.

What was your experience like studying at OCSA?
I was in the acting conservatory and it was basically structured like a B.A. program in college. I feel like I actually got a college degree even though I’m not in college. I learned all the fundamentals and I especially had this incredible Shakespeare teacher Peter Uribe. He sparked such a big passion for acting and Shakespeare in me. I credit all of my passion for the craft to him. That also opened the door for me to get a manager and I got into an internship program at Shakespeare Orange County. I learned so much by working with incredible working actors there too.

When did you realize you wanted to pursue a career in this industry?
I come from a very Filipino family. (Performing) is very much prominent in that culture. We’ll do karaoke and everyone would want me to sing all the time. It was always there. I didn’t really become as passionate about it until I saw (a video) of Lea Salonga performing in Miss Saigon. That opened the door for me and made me realize that ‘Oh, not everybody is American in this industry. I can be Filipino and I can do this because she did it too.’ I told my family I wanted to do this as a full-on career and at first, they were really hesitant. I’m an immigrant and they wanted me to have a very stable job. My mom was trying to push me to be in some sort of medical career at first. Once I got this job, they were like this is an actual, viable career.

What has the response been like from your family?
My entire family is so excited. My mom is calling my family in the Philippines to just talk about the premiere and how excited they all are. 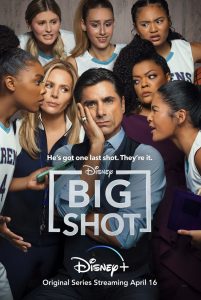 Watch It!
The first episode of “Big Shot” is streaming on Disney+ now!