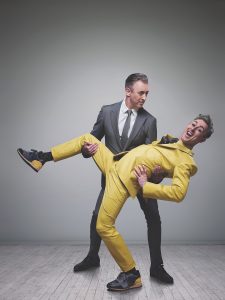 THE CHIPPER EXPERIENCE
APRIL 6 AND 7
Magician and comedian Chipper Lowell blends stand-up with music, mentalism, juggling, and tricks in his award-winning show. He first appeared at the Curtis Theatre 20 years ago and has since performed on “The Tonight Show,” the Disney Channel, and CW’s “Masters of Illusion.” He also has twice been named comedy magician of the year. Curtis Theatre, 1 Civic Center Circle, Brea, 714-990-7722, curtistheatre.com

“CATS”
APRIL 9 THROUGH 14
The revival of Andrew Lloyd Webber’s hit musical about a tribe of cats, which originally opened on Broadway in 1982 and has been performed in more than 30 countries and 15 languages, features all the original music and costume design, along with updated choreography. Segerstrom Hall, 600 Town Center Drive, Costa Mesa, 714-556-2787, scfta.org

JOEL SARTORE: PHOTO ARK
APRIL 12 AND 13
Sartore, an award-winning photographer and regular contributor to National Geographic, documents endangered species and landscapes around the world. In this Witte Lecture, he’ll talk about Photo Ark, his ongoing project to photograph some of the most endangered species and habitats in the world. Newport Beach Public Library, 1000 Avocado Ave., Newport Beach, 949-548-2411, nbplfoundation.org

“SHEEPDOG”
OPENS APRIL 19
This drama tells the story of two Cleveland cops—an African-American woman and her white male partner​—who fall in love. Everything gets turned upside down when he shoots a young black man in the line of duty. South Coast Repertory, 655 Town Center Drive, Costa Mesa, 714-708-5555, scr.org

“ONE SLIGHT HITCH”
OPENS APRIL 19
Comedian Lewis Black wrote this comedy following a bride on her wedding day. As her mom hustles around, making sure everything is perfect, the doorbell rings​—and the person on the doorstep throws everything into chaos. STAGESTheatre, 400 E Commonwealth Ave., Fullerton, 714-525-4484, stagesoc.org

“SKYLIGHT”
OPENS APRIL 19
Schoolteacher Kyra Hollis gets an unexpected visit from her former lover, successful restaurateur Tom Sergeant, on a cold London night. As they attempt to reconnect, they find that despite their mutual desire, they see the world differently. Originally staged in 1995, “Skylight” won a Tony Award for Best Revival of a Play in 2015. Chance Theater, 5522 E. La Palma Ave., Anaheim, 888-455-4212, chancetheater.com

CRISTELA ALONZO
APRIL 19 AND 20
Alonzo was the first Latina to create, produce, and star in her own network sitcom, ABC’s “Cristela,” became the first Latina lead in a Disney Pixar film when she voiced Cruz Ramirez in “Cars 3,” and serves as a regular guest host on “The View.” She’ll go back to her roots in this stand-up show as she made her name with a Comedy Central special and late-night TV appearances. Brea Improv, 180 S. Brea Blvd., Brea, 714-482-0700, improv.com/brea

AT HOME IN THE GARDEN
APRIL 25 THROUGH 28
South Coast Plaza will host its 30th annual Southern California Spring Garden Show, with activities including cooking classes from chefs at South Coast Plaza restaurants, a palm tour led by experts from Sherman Library and Gardens, succulent arrangement workshops, and a two-story centerpiece made from plants and flowers. There will also be events for children such as balloon art, face painting, and reptile displays. Crate & Barrel/Macy’s Home Store Wing, 3333 Bear St., Costa Mesa, 800-782-8888, southcoastplaza.com/gardenshow

MUSIC OF QUEEN
APRIL 26 AND 27
The Pacific Symphony joins forces with tribute band Windborne to perform some of Queen’s biggest hits. Expect to hear favorites such as “Bohemian Rhapsody,” “We Are the Champions,” “Killer Queen,” “Crazy Little Thing Called Love,” and “Another One Bites the Dust.” Renée and Henry Segerstrom Concert Hall, 600 Town Center Drive, Costa Mesa, 714-556-2787, pacificsymphony.org

PACIFIC PLAYWRIGHTS FESTIVAL
APRIL 2​​6 THROUGH 2​​​​8
Every year, this festival presents seven of the best new American plays in staged readings and full productions over a three-day period. Past festivals have included works that have gone on to be produced across the country, including “A Doll’s House, Part 2” by Lucas Hnath, “Intimate Apparel” by Lynn Nottage, and “​Cambodian Rock Band” by Lauren Yee. South Coast Repertory, 655 Town Center Drive, Costa Mesa, 714-708-5555, scr.org

CASA KINETIC: CULTURE SHOCK LOS ANGELES
APRIL 26
Hip-hop dance company Culture Shock Los Angeles will stage a performance based on the Dr. Seuss book “Oh, The Places You’ll Go.” In a first for Casa Romantica, about 20 dancers will guide the audience through the story from an elevated stage in the center of the historic courtyard. Casa Romantica Cultural Center and Gardens, 415 Avenida Granada, San Clemente, 949-498-2139, casaromantica.org

“THE REFUGEE HOTEL”
OPENS APRIL 27
Chilean refugees face the challenges that come with fleeing their homeland in this dark comedy. A fictionalized account of playwright Carmen Aguirre’s experience, it explores the universal realities of survivors of political oppression. Robert Cohen Theatre, Claire Trevor School of the Arts, UC Irvine, 949-824-2787, arts.uci.edu/boxoffice

“BAY AREA SCENE PAINTINGS”
THROUGH APRIL 27
Some of the best artists in the nation flocked to California from 1920 to 1970 to capture the state’s landscapes, places, and people in watercolor and oil paintings. More than 60 works from that era are on display in this exhibit, curated by author and California Scene painting expert Gordon McClelland. Hilbert Museum, 167 N. Atchison St., Orange, 714-516-5880, hilbertmuseum.com

“TREASURE ISLAND”
OPENS APRIL 27
This family-friendly play based on the novel by Robert Louis Stevenson tells the tale of Jim Hawkins, a cabin boy on the Hispaniola, who stands up against murderous plots, swashbuckling pirates, and a mutiny led by the infamous Long John Silver. Laguna Playhouse, 606 Laguna Canyon Road, Laguna Beach, 949-497-2787, lagunaplayhouse.com

“PROTECTING MOTHER EARTH”
THROUGH APRIL 28
This exhibit, curated by artist Rowan Harrison, spotlights Native Americans and their connection to the land, focusing on the protection and conservation of the natural environment, from their perspective. Muckenthaler Cultural Center, 1201 W. Malvern Ave., Fullerton, 714-738-6595, themuck.org