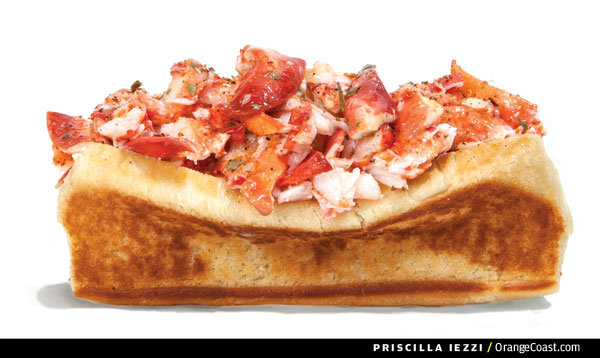 The beachy simplicity of this New England seafood treat makes it a natural for O.C. A few rules govern its construction: lobster meat, judiciously dressed with mayonnaise or melted butter, and a soft, open-top bun. With so few ingredients, each must be top quality. We compare two Orange County mobile-vendor contenders. • Wink’s sandwich is straightforward: lobster meat, melted butter or mayonnaise or both, and a properly griddled roll. $12

• A generous pile of tender meat, with plenty of large chunks, almost spills out of the roll.

• A great sandwich, with each bite delivering tender lobster supported by a crisped roll.

• Lobsta Truck’s roll is imported from New England; meat is dressed with clarified butter or a tangy mayonnaise dressing. $12

• There’s a good amount of meat, but it’s a bit overcooked, and in no danger of overflowing.

• The sandwich is slightly overdressed, and the proprietary sauce’s seasoning is too reminiscent of relish-flecked tartar sauce.

• Good, but could use a little more lobster, a little less dressing, and a leaner, crisper roll.

The Verdict
Lobster rolls are few and far between in O.C. Lobsta Trucks’ are a treat, but Wink’s, above, is the clear winner.

This article originally appeared in the September issue.