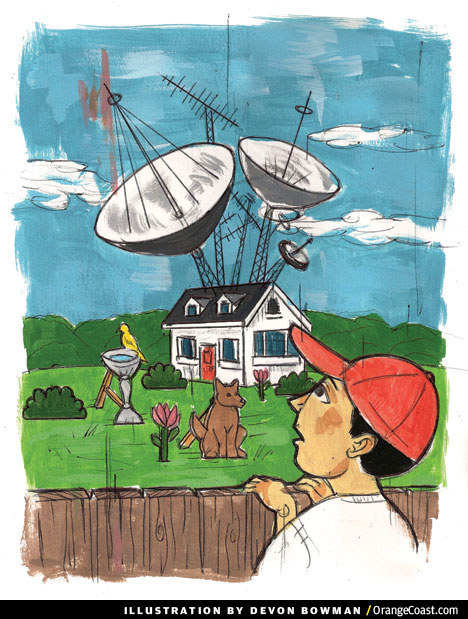 Q: What dark secret does Santa Ana’s Centennial Park hold?
A: What appeared to be a large farm on the site during World War II was actually a government spy operation. Starting in 1941, this listening station used antennas to eavesdrop on messages sent to enemy agents inside the U.S. The property’s fake house stood atop a complex that reached three stories underground, and work done there led to the arrests of at least 33 spies. During the Cold War, the site remained under high security, although officially it was an FCC monitoring station. The land was given to the city and the local school district in 1967. And as we’ve recently learned, our government today uses far more sophisticated equipment to monitor pretty much everyone.

Q: O.C. stages some great parades, but the crowds make it uncomfortable
to be a spectator. How do we solve this?
A: We could take a tip from the 1926 Huntington Beach Fish Parade. The brainchild of Councilman E.B. Stevens, this fishing-themed parade stretched through the county, reaching La Habra, the north end of Orange, and even over the county line into Norwalk. Bathing beauties, bigwigs, and bands all rode in open-top vehicles and undoubtedly were frazzled by the day’s end. But there were plenty of good seats along the 85-mile route.

Q: Is there actually a red hill from which Red Hill Avenue takes its name?
A: Absolutely! You’ll find Red Hill on maps in the unincorporated Tustin area, bracketed by Loma Roja, Ranchview Drive, and McLean Drive. It’s red because the soil contains mercury, which also is why the hill has been mined from time to time since 1884. This landmark was known as the “Little Hill of the Frogs” by the Spaniards, and as “Katuktu” by the Native Americans. It also was the point at which several rancho boundaries met. The last mining at Red Hill was during World War II, and as historian Juanita Louvret points out, today “the only prospectors are Realtors.”