The next mayor of Laguna Hills traces his interest in politics to a burned-out wall socket.

Hang with me here, because somewhere between that outlet and the highest office in the city is a holiday ritual—one that’s only 5 years old, but already is important to tens of thousands of people.

Councilman Andrew Blount may have the most sophisticated home holiday display anywhere. People throw the term around casually, but it’s fair to say that he and wife Michelle are software whizzes. Forty-year-old Andrew started his first software company at 8. His current company’s newest product is a get-out-the-vote app.

They’ve brought some of that know-how to their holiday display: an interactive 120,000-LED light show choreographed to holiday songs that are broadcast on 100.1 FM to passing motorists, and a ticker that displays incoming texts on a 6-foot screen within 60 seconds. (Yes, there is a profanity filter, and yes, there have been seven marriage proposals.) Most of the messages are exchanges of peace and love between family members and neighbors, others are thank-you cards to the Blounts, all mixed in with odd messages, some of which are listed on their website, orangecountychristmaslights.com. (“Meh. Meh. Meh.” “My dad ripped my bro’s undie in a wedgie.” “Hands off my daughter.”)

This year, those driving by 25473 Nellie Gail Road will witness the latest wow, cribbed from a YouTube bit out of Ukraine: The architectural elements of a house—windows, columns, roofs, porches—appear to move around and assume a life of their own, thanks to a technique known as projection mapping.

When I visited the Blounts in September, his brother-in-law was in the garage creating a scaled-down plywood face of the house, because the landscaping around the real house was getting in the way of the projection mapping. Andrew, barefoot, in shorts and a pale silk shirt, was upstairs dividing his time between Realated, his company, and choreographing his Christmas display. He draws all the images on his computer, and it can take 80 hours to complete each song. The Christmas clock was ticking.

Downstairs, Michelle, in camo pants and black Converse, was carving Styrofoam for the snowy backdrop of her elaborate miniature Christmas villages. There’s a North Pole with more than 100 tiny houses, a waterfall, a Bavarian village (the Blounts tell me the tradition of Christmas lights goes back to 17th century Germany), a Disney village, a town for the Grinch, a carnival boardwalk, a Charlie Brown small town, and a snowy forest for Rudolph.

Here’s where we find the real heart of the tradition. People don’t just drive by the Blount house. They go inside.

One day in 2008, Michelle burned out a wall socket with her indoor display, and Andrew, normally bah humbug about Christmas, started helping her with the electricity, and also hanging lights outdoors. The following year, Michelle’s mother invited in two curious passers-by. That was the beginning.

It’s become sort of a radical welcoming of their neighbors, many from far beyond their affluent neighborhood. From families hit by the recession, to lonely Laguna Woods pensioners, to a CHOC kid whose family didn’t decorate because they didn’t know if their child would live to see Christmas. For one month each year, the Blounts get to know a lot of people they might not otherwise meet.

The Blounts have heard from one neighbor unhappy with the crowds. Andrew says the complaints may be fewer than might be expected because there are several ways in and out of their block. Also, there’s precedent. Another neighbor regularly hosted a big Nellie Gail home light display, but it ended a few years ago when the owners moved.

Although there are inconveniences to inviting people in for the holiday season, the Blounts feel they know their neighbors now, and that they’ve found a way to give to the community. Some guests who come through their home with their children say they can’t afford Christmas entertainment, so this is it.

Andrew grew up in a single trailer in western Colorado, Michelle in “not quite a double” in Texas. They knew their neighbors well. Not so in South County, where many have such long commutes that they burrow into their homes each night and don’t come out. The Blounts burrowed in with the best of them.

“We live in these great neighborhoods in Orange County, but we never meet our neighbors,” says Andrew. “We literally have gated houses here. Nothing says welcome like a gated house.”

Andrew told me he’s made friends through this Christmas display—and that these conversations inspired him to serve on the board of the Orange County High School of the Arts. The more people he met at his Christmas display, the more he became aware of issues in the community. A few years ago, people encouraged him to get more involved in politics. “I started to think, maybe I could help.”

Because the show has grown to be more than the Blounts can handle, volunteers help meet and greet the guests. Visitors are encouraged to bring a new, unwrapped toy for firefighters to give to less fortunate children.

When I first heard about this Christmas display, I thought: Yup, Americans do Christmas to excess. We just do. And in Orange County, we can step it up even more, because this is a place where so much creativity meets so much money.

But I figured it out as soon as I met Andrew and Michelle Blount. They  aren’t about the ostentatious display of holiday spirit. They’re about sharing that spirit.

Just the idea of opening my house to thousands of neighbors and strangers, simply to share a little holiday cheer—I couldn’t do it. But my more generous self applauds the Blounts for finding a real way to connect with the people around them. It’s a delicious irony that technology—which so often discourages real human interaction—made it happen.

Send Good Cheer!
The show launches on Thanksgiving and runs from 5 to 9 p.m. Tuesday through Sunday until Christmas Eve. Visitors can text the Christmas display at 313-312-5473.

The Language of Life: Spanish Sessions Over Tea Teach Far More Than Vocabulary [An Essay] 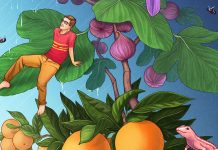 In Modern O.C., Is It Possible to Find Tranquility Amid a Busy Hub?