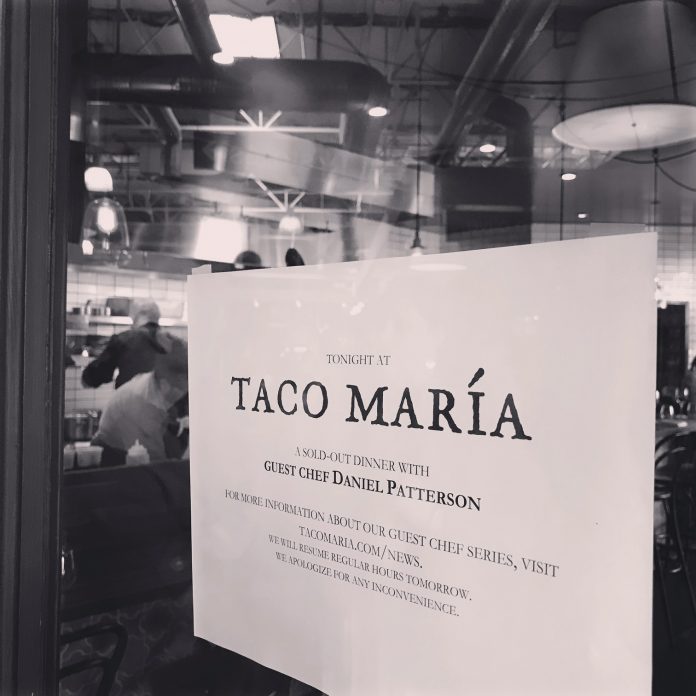 Expect the unexpected at Taco Maria. The dishes are luscious with a spark of surprise. That’s how I think about chef-owner Carlos Salgado’s cuisine, with concoctions such as fingerling gorditas that welcome anchovies and caviar; bright green broccolini paired with chorizo and toasted almonds, perfectly sweetened with piloncillo; flawless tacos flavor-balanced with juicy black grapes. Salgado’s highly acclaimed Costa Mesa restaurant showcases sophisticated Mexican fare; he classifies the cuisine as “Alta California,” a mixture of Mexican and American cultures. When I heard that he was reuniting with one of his most prized mentors, Daniel Patterson, to co-create an eight-course dinner, I jumped at the chance to attend. The suspense revolving around the collaborative menu these two culinary masterminds would come up with gave me an adrenaline rush.

Patterson is the Oakland-based chef and restaurateur behind many respected Bay Area restaurants, including the two-Michelin starred Coi in San Francisco where Salgado was hired as a cook in 2004. In a short amount of time he became the pastry chef, a job he held for five years.

“I loved working with Carlos,” said Patterson, winner of the James Beard Foundation’s Best Chef: West in 2014. “We always had a great rapport, both culinarily and personally. It has been wonderful to watch him grow into a great chef and owner in his own right, and our relationship has deepened over time.”

The dinner celebrated Patterson’s newest book, co-authored by perfumer Mandy Aftel, “The Art of Flavor: Practices and Principles for Creating Delicious Food” (Riverhead, $28). The event’s menu was inspired by the book, as well as the chefs’ time together at Coi and the food they’ve cooked since they worked together.

Perched at the chefs’ counter at what seemed like an arm’s length from the galley-style kitchen, I had a clear view of prep and performance, the constant motion and the challenges. A kitchen team of seven were laser-focused on their assigned courses. Initially Patterson and Salgado were locked in a culinary huddle, reaching agreement on the plating of the first course, a dish labeled “chips and salsa.” Indeed, it wasn’t what you might expect.

Patterson held up what looked like a bumpy wing of chicharron that turned out to be a crisp brown-rice cracker; those were the dippers. They were light and perfectly salted, served tossed in a shallow bowl. The pureed avocado mix that accompanied them was topped with orbs the size of large allspice berries. They were crunchy chicatanas, ants from Oaxaca that were as glossy-black as ripe Lindsay olives. The texture was beguiling, the flavor somewhat metallic. Scooped onto those delicious rice wafers, they were a palate adventure.

Patterson said he beleieved the ants lent umami and depth to a classic Coi dish. Fresh warm blue-corn tortillas are de rigueur at Taco Maria. Here one of those thick beauties was topped with steak fresh off the wood-fired grill. In Spanish, “cecina” refers to meat that has been salted and dried by means of air, sun, or smoke. Rare in the middle, it was planked with a thick-cut of soft white cheese from Vermont. Adorned with fresh lavender blossoms, the beefy fold-and-enjoy treat was aromatic and scrumptious. A classic aguachile showcases shrimp submerged in liquid seasoned with chiles, fresh lime juice, salt, cilantro, cucumber, and onion. For their enticing version, the chefs added the flavors and colors of a farmers market: peeled cherry tomatoes, wedges of ripe yellow tomatoes and honeydew melon, slivers of fresh fennel, mandoline-cut baby summer squash, and assorted fresh herbs and edible flowers. I watched all the fruit and vegetables being prepped; most had been precisely cut and placed on paper towels to absorb liquid and prevent a watered-down taste.

The broth was bright with lovely acidity; it left a delectable liveliness in my mouth. I could have eaten two bowls, but I didn’t—there was so much more to follow. Oh-so-tender slices of abalone were cooked in an exquisite pineapple spiked custard-like butter sauce. The lemony taste and appealing texture of the sauce created the perfect counterpoint to the achiote-seasoned abalone. Braised lettuce brought color and a pleasing vegetal accent to the dish. I was so enthralled, I’d finished most of the dish before I remembered to take a photo. Only one corner remained for the shot This beautiful white corn tamale was wrapped in a steamed cabbage leaf. It rested in a pea-green puddle, the sauce made with corn stock, huitlacoche, chanterelle mushrooms, and green chile, complex flavors mirrored for the most part in the tamale’s filling. Each end of the tamale had been trimmed so the cabbage “jacket” fit to perfection. The flavors and textures were so inviting, I fantasized of having another one for breakfast. Alcohol pairings were served with each course: cocktails, spirits, or wine. Not sure whether it was the drinks I’d consumed or my failing eyesight, but I thought Salgado was cutting a banana cake for the dessert course. He had been stationed at the end of the bar serving as the expeditor, voicing orders and checking plates before service. But he left his post to make sure the thin, beautifully browned “cake” was cut into precise rectangles.

As it turned out, I wasn’t even close. It wasn’t dessert. It was tripe that had been braised, layered and pressed, then made crisp on the outside while remaining delicate inside. It was served with rice stained with squid ink, giving the grain an ocean-like salinity. A topper of a lemony herb salad added a fresh crunch, while a smidgen of orange zest added citrus perfume. It’s hard to imagine a more perfect dessert for this meal. It was cold-hot bliss with deep caramelization branding the top of the frozen marshmallow by pressing the top with a red-hot coal, a blazing chip fresh from the wood fire.

Patterson said that the mixture of star anise and black pepper that augmented the lime marshmallow created another layer of flavor, adding that one of the best aspects of collaboration is taking things that are already good and looking at them with fresh eyes. OK, I’ll admit, by the time the second dessert arrived I was very full. But there was just enough room for one or two bites of the banana dessert, a sweet amped with cajeta, that irresistible caramel sauce made from goat’s milk. A green drizzle zigzagged the top. Could that be made from the burnt avocado leaf referenced in on the menu? I suspect it was.

My excited palate was ready for a nap.

The Art of Flavor is Patterson’s groundbreaking cookbook designed to help build and layer flavors for the professional and home chef alike. Along with dozens of recipes, it features stories, tips, and practiced nuances.

The book makes the reader feel as if Patterson is in the room, giving lessons and offering suggestions. A simple recipe for Celery Root and Apple Salad is given as an example of how to use a sharp ingredient (mustard in a creamy dressing) to punctuate a somewhat bland ingredient (celery root). He points out that the addition of a tart green apple adds the needed flavor contrast and tartness.

Be sure to try the Pickled Mushrooms with Tarragon on page 183. I love the addition of fresh tarragon leaves. The mushies can be added to a crudité platter, eaten as a snack, or used (chopped) in a simple butter sauce.

Chef-Restaurateur Daniel Patterson is behind the Alta Group, which includes Alta in the Bay Area and soon, Los Angeles, Alfred’s Steakhouse in San Francisco and Plum Bar in Oakland. He is also the co-founder of the ground-breaking fast food venture LocoL (Oakland) and continues to oversee his acclaimed Coi in San Francisco. 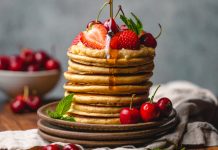