As South Coast Plaza celebrates fifty years in Orange County this spring, the Metro area surrounding it has maintained a hub of culinary curiosity. Sure, there have been minor nips and tucks here and there, but sometimes a new younger and hotter restaurant is better than any high and tight restaurantoplasty or double D bar augmentation. Such is Water Grill, the naughty yet nautical seafood and bar to grace the area, and oh is she making waves with sexy ship swank and a menu that was probably written by Herman Melville.

I’m not sure what I was expecting my first trip, but four bars wasn’t one of them. My immediate reaction was to pick the one with the most interesting-looking clientele, and at three P.M. on a weekday did not disappoint. I’m pretty sure I nabbed a seat in between a real housewife of Orange County, an older gentleman with an eye patch, and the cast of Finding Neverland (the current show at nearby Segerstrom). Sitting up straight at the copper-topped bar made me feel somewhat like the Energizer bunny, switched on and ready to drink.

“Is this real copper?” I ask beverage director Kevin Felker, a busy guy with short black hair and company apron. “Yep, they polish it every morning,” he says while shaking my first drink, the Beauregard. “Am I turning violet?” I ask after a few Oompa Loompa-sized sips, noting the small crunchy dark seeds floating in the pink drink are from freshly muddled blueberries. Somewhat of a vodka sour, the drink is a fantastic palate starter and would pair well with the raw bar nearby.

With a crudo sampler coming, I opt to pair it with the Gin Gin Mule, whose minty ice resembles a polar ice cap in a sea of spicy ginger beer and London dry gin. The chilled slate serving plate of wild Tahitian bigeye tuna, scallops, and Faroe Islands Atlantic salmon was a perfect intermezzo, with many flavors and textures playing off one another.

Standing up to the Georges Bank Atlantic fish & chips, the Campfire Sling cocktail created a perfect storm of flavors. The drink uses Rittenhouse Rye whiskey, maple syrup, and chocolate bitters with a flaming squirt of citrus oil from a fresh orange peel. Next time I go, I’m going to ask chef to use the same technique on my crispy fish for that extra Gloucester flair. 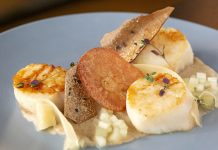 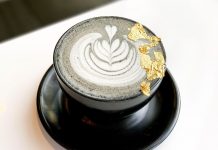 Insta-Hit: The Black and Gold Latte at Feen Coffee in Huntington Beach 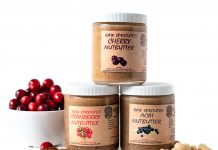