Home 2016 How to Host Your Own Bourbon Tasting 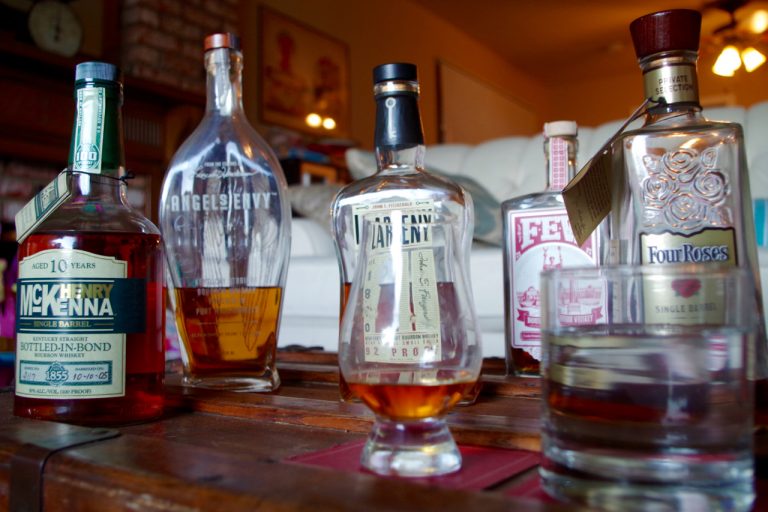 Bourbon is one of America’s most storied, complex, and fun spirits. Using craft spirit specialist Chris Dion of Young’s Market (and The Mixing Glass) as a guide on my boozy vision quest, I set out to do some afternoon “palate validation” using Fred Minnick’s book, “Bourbon Curious,” while raiding the Dion family liquor cabinet—a hutch filled with more spirits than a Ghostbusters ghost-trap.

One thing the experience proved is that hosting a tasting has never been easier. The book breaks down the spirit into four main categories: grain-forward, nutmeg-forward, caramel-forward, and cinnamon-forward, each with tasting notes, production information, and history of most brands in a straight-forward manner.

Evaluating any spirit, beer, or wine is similar in that proper glassware has a huge impact on the results. For any whiskey, we suggest a standard Glencairn glass, which can be found at The Mixing Glass, in Costa Mesa’s OC Mix, along with the book.

With our water, spittoons, notepad, and bourbons ready, we  poured our first made by FEW Spirits. It was noted in the book as a grain-forward bourbon. My first impression of the aroma is dominated by molasses and brown sugar graininess, similar to a Wee Heavy Ale. A drop went down the wrong pipe on my first sip, making my voice sound like the Godfather for a few minutes, as I said “the wood really pops on the finish, as does notes of spice” in my gruff voice.

Taste number two, we pop a bottle of Henry McKenna 10-year bottled in bond. As each bottle might differ, ours has big notes of nutmeg, Hubba Bubba bubble gum, rye spiciness, and even caramel. What a delight! After adding a bit of water, the flavor bursted with nutmeg spice, which is what the book noted.

Bourbon made with a significant amount of wheat tends to be on the mellow side, and that’s where we went on taste number three: Larceny. Noted in the book as being caramel forward, my first impression is soap, “or rather lavender and floral,” correcting myself as to not make it sound gross. The book notes it as “walking into a garden of lilies, roses, and honeysuckle vines,” so I’ll call my tasting notes a win. On the sip, vanilla and caramel dominate the velvety finish.

Closing the tasting with a cinnamon-forward whiskey, we went with Four Roses, which can be vastly different depending on the bottle code. Ours was “OESO”—indicating it was made at Four Roses distillery; is 75 percent corn, 20 percent rye, and 5 percent malted barley; is a straight whiskey distillation, and the final O indicating a fruity yeast strain was used. My first impression was cornmeal pancakes with real maple syrup, layers of cinnamon, concord grape, and…whoa…this is intense. Easily the most complex bourbon of the four, Four Roses has me coming up with different aromatics on each whiff. “Why do you think this bottle is the lowest?” asks Chris, rhetorically. This one, we savor. Pro tip: find bottles of Four Roses with different codes and do a vertical tasting!

Stop by the Mixing Glass at the OC Mix for all of your bar needs, or even sign up for a class. 3313 Hyland Ave, Costa Mesa, themixingglass.lightspeedwebstore.com